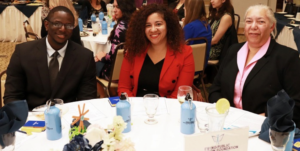 Thanking ETS for its commitment to, and support of, local education, the Ewing Public Education Foundation (EPEF) recently awarded ETS with a certificate of recognition. At the same time, at an annual awards ceremony, ETS continued its 20-year-plus tradition of supporting Ewing, N.J., schools by announcing two new teacher grants, one for literacy and one for math.

Staff from the ETS Center for Advocacy and Philanthropy (CAAP) attended the event, as did ETSers who live in Ewing, a community where ETS has a call center and warehouse facilities.

As a founding and sustaining partner of EPEF for more than 20 years, ETS funds teacher grants awarded by EPEF to teachers in the Ewing Public Schools in a variety of academic areas. Teacher grants support the design and creation of innovative programs and range from $100 to several thousand dollars. They support literacy, community/leadership, math, science, technology and creative arts projects.

“There’s no question that working together with EPEF and the superintendent, we are making a difference in Ewing Public Schools,” says Lenora Green, Executive Director of CAAP. “We are truly partners in education.”

At this year’s awards event, Laurie Russell, Manager of Community Relations for CAAP, presented two teacher awards. One was for a Parkway Elementary School online literacy program to help second-grade students who are below-grade-level readers. The other was for a new Lore Elementary School physical education program that will incorporate the development of skills in mathematics, geography, physical fitness, health, science, personal safety and music.

CAAP supports Ewing Schools in a number of ways. Other grants have supported the improved use of assessment data, discussions and presentations on achievement gap initiatives, in-house professional development programs related to closing achievement gaps, and teacher- and staff-recognition programs.

“By allowing EPEF, the Board of Education and the schools to use our facilities for strategic planning meetings, retreats and other events, we have made a significant impact on their ability to collaborate and work toward building better schools,” says Karl Clark, ETS Test Security Supervisor and Vice President of the EPEF board of trustees. Clark will become president of the Foundation in August.

EPEF works closely with Superintendent of Schools Michael Nitti and members of the Ewing Township Board of Education to achieve its goals. “The continual support of ETS allows both the EPEF and the district to participate in programs and support endeavors that otherwise would not be possible,” says Nitti.